Reprint now available and on sale!!! 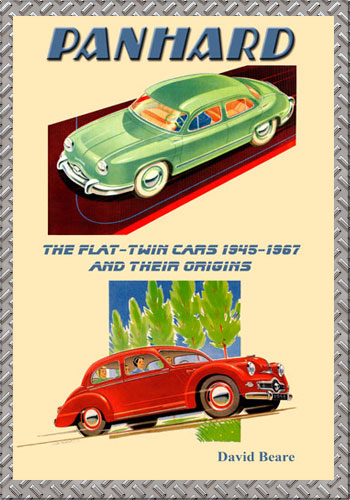 Until now an informative in-depth, fully-illustrated English-language history of Panhard’s ingenious post-WW2 flat-twin cars has never been published. French language books abound; many are well-written milestone works illustrated with Panhard company archive images, studying models from 1945 to the company’s demise in July 1967. We felt it was time this lack was addressed and so this book, “Panhard, the flat-twin cars 1945-1967 and their origins,” is the result of four years research and writing. It covers all the factory- made models including light commercials, estates, sports cars and convertibles and references Panhard’s many competition successes. The in-depth study of often-revolutionary technology used by Panhard for their flat-twin cars is illustrated throughout by many period images. Social, political and industrial influences on Panhard’s decision-making throughout the 22-year period covered by this book are also referred to, as are the profound effect some of these had on the products and future of the Panhard company.

Panhard car manufacturing began at the very dawn of motoring, when Périn- Panhard, a manufacturer of woodworking machines, employed engineer Émile Levassor to help establish a new factory on the outskirts of Paris. Shortly afterward the company was renamed Panhard & Levassor and took out a licence to make Gottleib Daimler’s new internal combustion engine, possibly as a power supply for woodworking machinery. At the 1889 Paris Exhibition Wilhelm Maybach displayed his Daimler-engined quadricycle, it was seen by Panhard and Levassor who immediately began building their own automobile. In 1891 Panhard & Levassor became the world’s first series production car manufacturers and by 1893 the company had built 52 vehicles with a variety of bodies.

For forty-eight years until the beginning of WW2 in 1939 Panhard & Levassor were at the forefront of motoring innovation; they created the ‘Panhard’ layout of an engine in the front, gearbox behind and rear axle drive, built only sleeve-valve engines from 1910 and were one of the first to adopt chassis-less monocoque body construction in 1936 for the superb Dynamic saloon. Panhard & Levassor also built trucks, buses, aero-engines, marine engines, Micheline rubber-tyred railcars and the world’s first diesel sleeve-valve engine.

All that changed in 1939 at the outbreak of WW2, followed by the invasion and surrender of France in June 1940. Under German control Panhard was forced to make armoured-car tracks for the Wehrmacht and develop other military vehicles. Much of the Paris factory had been cleared and personnel relocated to Tarbes in the southwest of the country, where planning began for a radical new car suitable for an eventual post-war France. Despite being horrifically destructive, wars are creative. Technologies develop rapidly to accommodate restrictions, giving rise to new ideas for personal transport. Such was the case for Panhard- doyen of motor manufacturers and creator of many exotic inter-war cars. No longer would it be possible to make or sell splendid grand touring cars such as those Panhard designed in the 1930’s.